Our adventure into a salt cave We live not too far from a couple of salt therapy places, but have never actually been before. However, it has been a tough week or so for MyItchyBoy with his eczema and so I thought that it would be a good opportunity to give it a go.

Salt therapy is something usually recommended for respiratory problems including asthma and colds, but it is supposed to benefit eczema too.  It did take some convincing for MyItchyBoy to agree to come along, but once he’d heard they’d be toys and no need for him to be poked and prodded by a doctor, he was all for it.  I can’t think of what he was imagining in his head when I tried to explain the salt cave experience to him, having never been myself.

It was easy to book a session for the following day and since the first session is free, it seemed silly not to try something that might give him some relief.

Into the salt cave 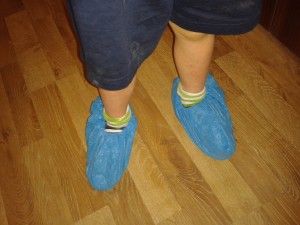 A free locker is provided to put your things in, then, you cover your shoes with blue bags and hair with a blue net.  This is to keep the salt in the room clean.  I also changed MyItchyBoy into shorts so that the air could get to his skin.

It was just the two of us in the children’s room since we went on a weekday morning.  The walls were decorated in a way to mimic a traditional salt mine and the floor is covered with salt.  It’s similar to fine sand to walk on and play in.  The lights were dimmed enough to have a calming effect but allowed us plenty of light to comfortably play and read.  There was a sofa, magazines for parents, some comfy chairs and a good mix of toys and books.  MyItchyBoy was most taken by the sand table and trucks that made tracks in the salt.  He also played with the kitchen, busying himself filling pots and pans with salt using various utensils.

There was also large TV screen with lots of options for younger and older kids.  However, I was pleased it was just us and there wasn’t someone there wanting to watch Harry Potter as I’m not sure it would have been the same calm experience.  We left the TV in the start up mode which just told us the humidity and temperature of the room as well as how much time we had left (each session is 60 mins).

At the time, there were no noticeable good or bad reactions for MyItchyBoy.  At one point he was scratching one of his wrists and said it was itchy.  This was after he had pushed a few cars across the room through the salt, so his hand had been pretty much covered in it for a good few minutes.  We brushed his wrist so get rid of any excess salt and after that he kept his hands out of it.  He still played happily, but no more burying his hand under it.  He didn’t seem itchy at all for the rest of the time in there.

For the rest of the day he also seemed less itchy than normal.  He did wake up that night for more cream, but the next morning his legs definitely seemed to have calmed down and were less red.  As with so many skin solutions that you try once, it’s hard to know whether it really has made a real difference or not.

Overall, we enjoyed ourselves.  MyItchyBoy enjoyed having my full attention (although I did manage to flick through a magazine or two when he was preoccupied with the big digger) for a whole hour.  I think there was a good novelty factor to it and the fact that it was just the two of us made it a nice, calm experience.

I am not sure we will plan another visit just yet, but next time he has a flare-up that we are struggling to control, I shall certainly see if we can get a quiet session booked in.

2 Responses to Our adventure into a salt cave