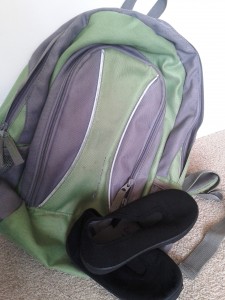 Over the first two weeks of the summer holidays, MyItchyBoy spent 5 days at a local sports camp.  The 5 days were spread over the fortnight as he is still only 4 yrs and I figured that with such a long day (8:30-16:00) he’d not manage every single day.

I chose the camp as it was close by and that meant that in any emergency I would be able to get there quickly.  Having an allergic child, when you write the Emergency Contact Details on the form, you think very carefully about who, how and when as there is a real chance of them being used.  However, when I say ‘emergency’ thankfully it is mainly those times when your child has some sort of reaction to something and you get a call from the – rightly – over-cautious carer.

Packed lunches were required by all.  Tick!  Great, MyItchyBoy would not be the odd one out and there were strict instructions about nuts and sharing and the like.

A sports camp in the summer.  Sunshine.  Heat.  Eczema nightmare?  Well, possibly.  Sunscreen dilemma?  Naturally.  However, MyItchyBoy is a busy kid, who likes to be busy.  When he’s busy, he’s not scratching his skin.

The camp had good child to adult ratios, which I liked.  That meant that they’d be someone there to notice is something was amiss with MyItchyBoy, but more importantly someone to notice if he’s standing in the corner scratching his eczema.  Wonderfully, they put cream on his skin every day at least once with no worries, no forms to fill out or calls first.

Medicine policy was good: all meds willingly administered in case of need.  Brilliant!  None of this nonsense about calling first.  They kept everything in a huge red bag marked First Aid and the policy was administer/call ambulance first then worry about fretting parents later.

Well, MyItchyBoy really enjoyed himself.  I am not entirely sure what he did all day (there were some odd and amusing descriptions of some of the sports as at 4yrs there are some actions and objects you just don’t know the words for yet) but he was suitably shattered when he came home.

He was happy to go, come home and apparently was well-behaved throughout (phew!).  He spent 5 days with kids he’d never met (up to 12yrs), in a place he’d never been, doing stuff he’d never heard of, let alone done.  I was proud.

One day he came home itchy with a bit of a red, bumpy rash on his arms and legs.  Piriton sorted it out and I suspect it was grass rash judging from the vague descriptions of the day’s activities.

Well the first day I checked my phone every 20 minutes.  I worried about him scratching, getting hurt (he did report getting hit with a ball and a parachute (!) on two different days) but mostly worried that his skin would flare up or he have a reaction to something.  I’m not sure what I thought really.  Just not used to letting him go off into the world like that.  It didn’t help that around lunchtime on the first day I got a phone call on the land line (no one ever calls on the land line) asking if I was his parent or guardian.  Panic and the sick feeling in my stomach was quickly overcome.  I apologised to the dentist receptionist who only called to make an appointment for him.

The other days I tried to be more relaxed about it and by the last couple of days I think I actually managed it.  I didn’t venture far from home on any of the days, but that was mainly due to being a bit poorly at the end of the second week anyway. 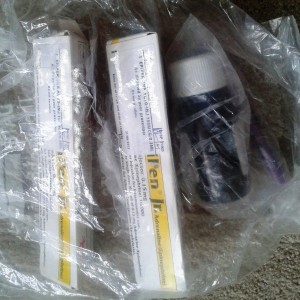 Aside from worrying, the first day we got halfway home when I realised we’d left the emollient, Epipens and piriton stash in the first aid kit.  Day two, we took the spares instead to leave there and I promised MyItchyBoy I’d pick him up in the car as the extra walk home/piggyback from me was too much for his little legs after a long day of rugby, hula hoops, and running the 400m (yes, the mind boggles!).

We also managed to leave a sunhat behind over the weekend, but that apparently just made me normal as the line-up of sad, left behind sunhats seemed to get longer every day.

I’m glad MyItchyBoy had the chance to go to the camp – that I was able to trust him and the organisers and myself to give him the freedom and independence to do it.  For every day that I feel happy and proud of him taking his next steps into the world, there is also the panic of so many news stories of kids who have had fatal allergic reactions.  I don’t think that fear will go away ever and I am not sure it should.  In the meantime, I am taking some small risks and using them for learning opportunities for both me and MyItchyBoy.