Two days before I was sectioned for the first time, I needed to buy some new trousers for work. The ones I was wearing were a UK size 10, but despite using a belt, they were far too big. The ones I found that I liked only properly fitted me in a UK size 6, but I decided not to buy them. I left the city centre, and made do with the trousers I had been wearing for work that night. It turned out that that night would be the last time I would work for a considerable length of time.

In hospital, I was forced into taking the antipsychotic olanzapine (Zyprexa), and soon, I could feel that my appetite had increased. However, by this point, I hadn’t eaten any solid food for about a month and was living off Ensure Plus drinks (a nutritional substitute) instead. The Ensure Plus always seemed to make my appetite increase, but the olanzapine was causing my hunger to be extremely painful. Even after I started eating properly again, I found that I could not stop the chronic pains from hunger.

Pretty soon, my favourite size 8 jeans were too tight. Then, after being discharged from that hospital, I began eating like a horse. I would eat a pretty large breakfast, lunch and dinner along with three snacks a day. Despite the snacks consisting of carrots, grapes and other fruits, it didn’t prevent me from gaining a considerable amount of weight. Moving up to size 10 jeans only lasted a few weeks, if that. By the time I came off olanzapine, three months after starting it, I was up to a size 12 – three sizes bigger in as many months.

Coming off olanzapine slowed the weight gain, but didn’t stop it. I was moved onto quetiapine (Seroquel), and was still on this when I was sectioned the second time. My weight continued to increase as I took this new medication. Shortly after arriving in hospital, I was taken off quetiapine and was started on clopixol in depot (injection) form instead. As the clopixol caused akathisia (painful restlessness), arguably the worst side effect of antipsychotics, and made me walk off the pain for long periods during the night, my weight finally plateaued. After three months of this, I was started on another antipsychotic that can cause considerable weight gain – clozapine. The ‘zombification’ (extreme drowsiness) that clozapine causes took the akathisia away, but it made my weight go up again. Pretty soon, my size 16 jeans were feeling a bit tight. Feeling extremely frustrated by this, the hospital referred me to a dietician.

As nice as the dietician was, all she ever did was make me write down everything I ate and drank, and then give me a lesson in diet and exercise. It was useless information at the time, because I am a notoriously fussy eater and hospital food is far from appetising. My parents often brought in food for me because they knew if I didn’t, all I would eat was chips, yogurt and the occasional piece of Friday fish. Plus, the only exercise I could get was the odd walk with the therapies team, a game of badminton here and there and the occasional sprint away from the hospital. That last exercise wasn’t a good idea.

However, due to no improvement in my schizophrenic symptoms with clozapine, my psychiatrist finally decided to dress this and my weight gain problem. He told me he would start me on a second antipsychotic, aripiprazole (Abilify), alongside the clozapine. This was to try and improve the efficacy of the clozapine but also to try and stop the weight gain.

Being told that a second antipsychotic would help my weight sounded ridiculous, but as I was so upset by my drastic weight gain in a period of less than two years, I agreed to it. However, not believing the aripiprazole would help me lose weight, I decided to start on a crash diet to try and ‘kick-start’ my weight loss.

The diet worked, and I lost two stone (28 lbs) in two months. I felt delighted by this, but then discovered that my psychiatrist was putting my weight loss down to the aripiprazole. I had told him and the nurses that I was doing this crash diet, which had worked, but he was giving it no credit. He even wrote a report saying that the aripiprazole had succeeded in reducing my weight! Cheesed off didn’t begin to describe how I felt at that!

A short while after the weight loss, I decided to come off the clozapine as it wasn’t helping me. It took around six weeks to get off it, and in that time my aripiprazole was upped to 30 mg, the maximum recommended dose. However, the day after coming off clozapine, I was very physically unwell from the withdrawals.

I suffered with an increase of schizophrenic symptoms after coming off clozapine, but they subsided after a few weeks. However, the physical symptoms I suffered from the withdrawals were extremely painful. My psychiatrist told me that I’d had a stomach bug when I started to recover, but I’ve never had a stomach bug that bad that lasted a week. By the end of that week of vomiting, diarrhoea, stomach cramps and intense nightmares, I felt absolutely awful. However, the relief of being off the clozapine compensated for it.

Once I had fully recovered from my clozapine withdrawal symptoms, my weight started increasing again. The weight gain was slower this time, but after a year, I had regained all the weight I had lost through the crash diet and the clozapine withdrawal symptoms. The weight gain still continued though, and in the summer of 2011, just under three years after starting on antipsychotics, I was six stone (84 lbs) heavier and six dress sizes bigger than I had been before starting antipsychotics.

With an upcoming holiday that summer, I needed to buy some clothes for my bigger size. I bought a pair of baggy shorts for that holiday and for the first time in my life, I needed to buy a size 18. I tried laughing it off, saying the sizes must have been small etc, but inside, I was really upset.

A short time after buying these shorts, I was finally allowed to come off the antipsychotics. My weight started dropping almost immediately, but the weight loss was slower than the crash diet had been. I knew that the effects of another crash diet would be short-lived, so I wanted to lose the weight in a way that would keep it off. It worked, and ever since, my weight hasn’t increased. I’ve lost a stone and a half (21 lbs) since I came off antipsychotics in November 2011, and so far, the weight has stayed off.

The worst part of that side effect however, is having doctors and nurses implying that the weight gain is your own fault. Yes, I was eating that food and wasn’t getting enough exercise, but the hunger that antipsychotics cause was definitely not my fault.

There were times I ate so much that I felt sick and in pain from overeating, but at the same time, I felt like I hadn’t eaten for weeks. Feeling painfully hungry and too full at the same time was a horrible experience, and eating only gave a very brief relief. Plus, as the antipsychotics also caused intense drowsiness, getting exercise was extremely difficult.

As a picture says a thousand words, these are my favourite size 8 jeans, that fitted me perfectly before I started on antipsychotics. Underneath are the dark blue shorts I bought for the holiday just before I came off antipsychotics. They are size 18, the size I was after just three years of antipsychotics. 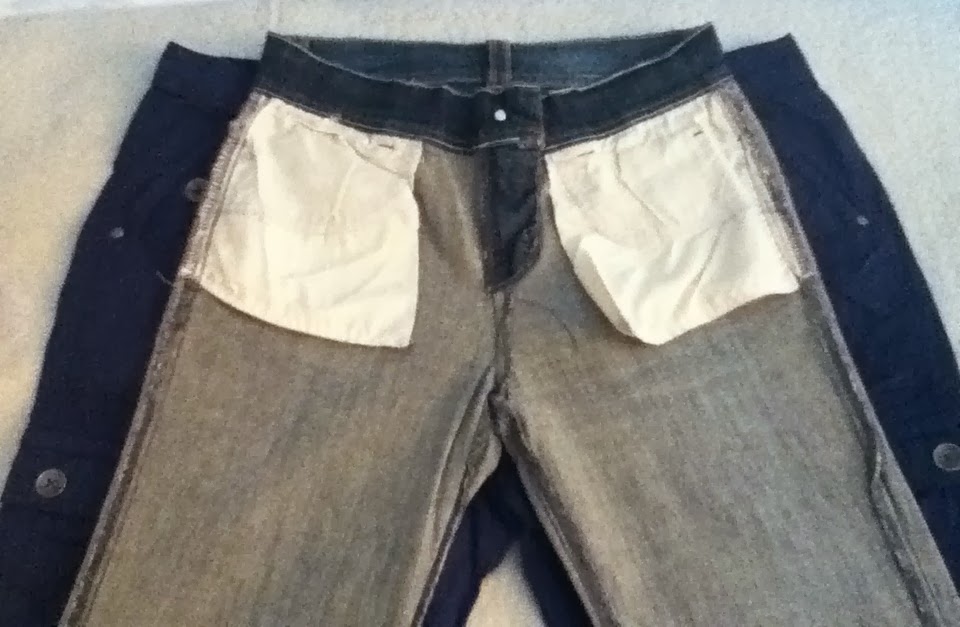 To put it another way, here is one thigh of the shorts on top of the waist of my size 8 jeans. Granted, the shorts are meant to be a bit baggy, but it still shows just how much weight gain antipsychotics can cause. 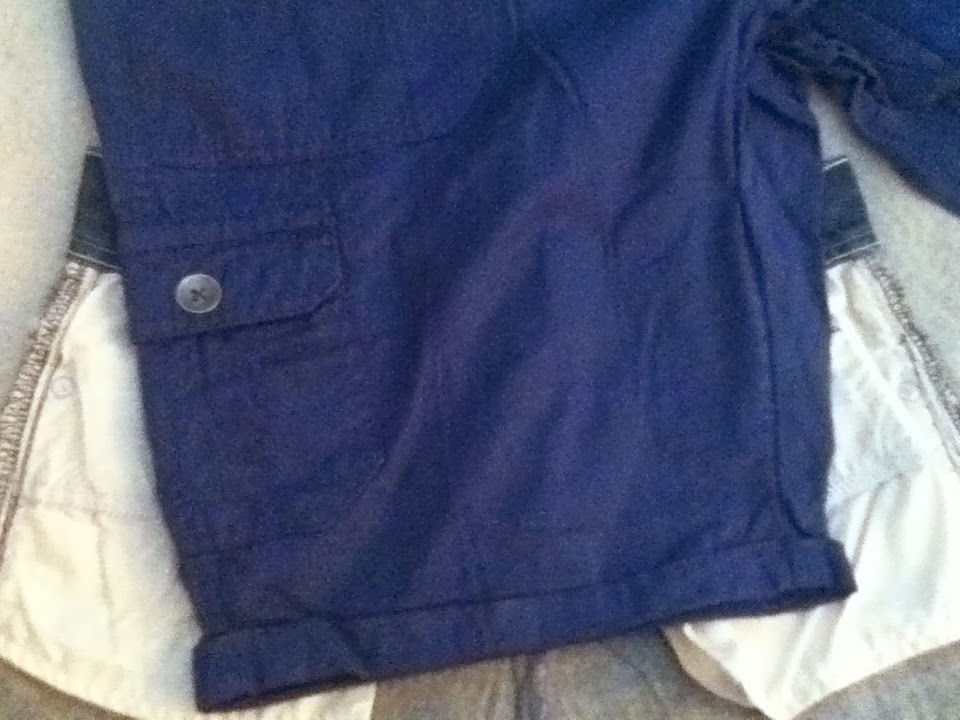 While diet and exercise is the best way of combatting the weight gain, these two methods alone aren’t always possible. When the medication is first started, the sedation can be extreme to the point of sleeping up to, and even over, 16 hours a day. Even when awake, a person can have difficulty finding the energy to walk, never mind start exercising.

One way of reducing weight gain is to exercise by doing something you enjoy. This will increase the likelihood of having the motivation to exercise. So whether you enjoy swimming, walking, or running, just do that, rather than doing something you dread doing, such as going to a gym. Eating little and often also helps, but that’s not always easy with the hunger of antipsychotics. Also, know it’s not essential to eat healthily and diet everyday. I’m not sure of the origin of this quote, but remember this:

“You don’t get fit from one salad and one workout. You won’t get fat from one burger and one rest day!”

I started suffering with the symptoms of schizophrenia at the age of 18, but it wasn't until I was 21 before I was diagnosed. My diagnosis was recently updated to paranoid schizophrenia, but I refuse to be known by a label. I am a person first and my illness last. I am always trying to break the stigma that surrounds mental health, schizophrenia in particular, and write as much as I can to try and achieve this.