Potty Training a child with Down’s Syndrome – our journey

Potty training is a rite of passage and a skill that most children conquer between the ages of 2 and 4 years of age.  And, just like every other life skill children have to master, some get the hang of the potty straight away and for others, like us (and for lots of different reasons) it takes a little more time, perseverance, patience and understanding (and a lot more floor cleaning, wet washing and ‘never mind’ moments!).

Our potty training journey began around 2.5 years ago when Ella was around 3.  With Lucy arriving a few months before and life beginning to settle down again, we decided to give it a try.  Having never potty trained a child before, the task of potty training a child with additional needs suddenly seemed very daunting to me. I had no idea where to start but decided giving her some no nappy time to see how she did and to introduce the potty were both good places to start. Things didn’t go well, Ella didn’t ‘get it’ and I decided to wait a while before having another go.  I was a little disappointed but knew that there was no point continuing if she wasn’t ready.

We kept the potty around and I would sit her on it at bath time.  We had a couple of fluke wee’s on the potty (cue lots of praise, clapping, singing and dancing from us!) but mostly she would sit there for ages then wee as soon as we put her in the bath.  I didn’t push it any further during this time as knew she wasn’t aware enough of her bodily functions and wasn’t ready to try again.

When she was almost 4, she started pre-school and they were great with her.  They took her to the toilet at specific points in the day and when they changed her pull-up.  She became much more confident with the toileting process during this time.  She was able to put her own pull-up on (high five for independence!) and could follow the toileting trip with independently washing and drying her hands.  Looking back, I see I could have been better at following their lead and implementing a better toileting routine at home but for one reason and another, it never happened.

By now, Ella was in size 6 pull ups but was rapidly becoming too big for them.  I consulted our Health Visitor (HV), wanting some advice on how to approach potty training and also to find out if she could be referred to the local continence team.  She gave me a toileting diary to complete and said Ella could only be referred to the continence team based on what the diary showed or when she was 5 (free continence products in our area are only available to children 5 and over – it was 4 and over when we moved to the area but this has since changed to age 5 due to funding cuts). My mum (who is also a HV and has also had 3 children herself) was also a big source of advice and support for me too.

It was also becoming more difficult to change Ella out and about. Changing tables in public toilets were now much too small for her and having to take shoes and trousers off to change a pull-up standing on a public toilet floor is neither hygienic or nice.  I’m a great fan of the ‘changing places’ toilets that provide space, bigger areas to change older children and adults and also provide hoist facilities for those that need it.  These toilets are becoming more common but are still few and far between – the one I used at children’s museum Eureka was fab, clean and had lots of space. I stood Ella on the big changing table to get her changed rather than the floor (which although it looked spotless was still a toilet floor). 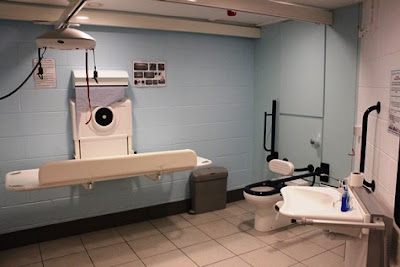 You can search for your nearest Changing Places toilet here, before you head out and about – I am sure there will be many more of them about in the near future.  Such a much needed and cost effective resource that more companies should be providing these facilities for their customers.

My biggest issue was the pull-ups – Ella was soon too big for the size 6 supermarket bought products.  The only place to find a bigger size was online from a continence product manufacturer.  And they weren’t cheap – tesco were around £4 for a pack of 34 pull ups and the size 7 packs of 16 pull ups came in at £5.90 each.  A big price difference!  We had no choice at that point than to buy the size 7 pull-ups as that was all that was available to us. You can see why there is pressure being put upon the major supermarket chains to produce nappies and pull-ups in bigger sizes at a more affordable price point.

I was told by the HV that even once referred to our continence team, they only provide nappies and do not provide pull-ups any longer, again due to budget cuts. As Ella had outgrown the nappies, the options that would be available to us as a free product from them would be a size XS adult pull-up (which I could almost squeeze into so way too big for Ella) or net knickers with pads.  Whichever product you got free from the service you would only be provided with 4 per day.

I had several issues with this:

In the end, I felt quite unsupported by our local service and our HV and wondered how on earth I was ever going to get Ella out of pull-ups.  My goal of having her potty trained before she started reception didn’t happen although we had another try during the summer holidays of 2015.  I could see she was beginning to understand what the toilet/potty was for and she was able to tell us when she had done a poo (but not before).  All good signs that gave me hope she would one day be nappy free.

In February 2016 at half term, Lucy was 2 and 9 months and I decided it was time to try potty training her.  And at the same time I thought I could try Ella again – school had been keeping up the toileting process at specific points in the day.  She knew the process really well, we just needed to crack the control aspect and waiting until she was on the toilet/potty to do things. 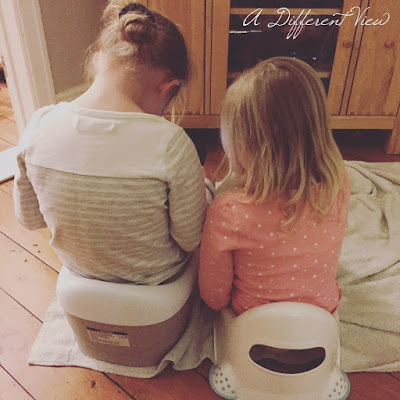 Lucy was more than ready and with just two accidents on the first day was dry day and night from then on. Ella still wasn’t ready and obviously just didn’t have an idea of bladder control although she was much more aware of doing a poo and doing them on the potty.

School (who have been amazing and have never put any pressure on myself or Ella for her to be continent) continued their input with taking her at various times during the day and then during the summer term, Ella suddenly started asking to go and became drier for longer. The reports at the end of the day that she had asked to go or had done something when they took her to the toilet were becoming more frequent.

And now, at age 5 the size 7 pull-ups were getting too small – our only available option was the size 9 night time pull-up from the online supplier (they don’t do a size 8 pull-up product and couldn’t tell me why).  The size 9’s also come in a pack of 4 but are £10 more expensive than the size 7 4-pack.  There are also 16 less products per 4 pack (size 9’s come in packs of 14 and size 7’s packs of 18).  The cost of buying them was becoming ridiculous.

So, with it being the summer holidays again, I had had it in my head for a while to give things another go.  And I don’t know what made me choose this particular day but on a Thursday morning I got Ella dressed into knickers and told her ‘no more pull-ups’.  I didn’t know what to expect – to be honest I wasn’t expecting to get any further than our previous attempts but knew we had the time to try again.  I was also feeling much more confident about the whole situation having now potty trained Lucy, although I know we were lucky with how well she picked it all up.

Ella did really well with just a couple of accidents during the first day.  I could see she was beginning to understand the sensation of needing to have a wee and was having a fuller bladder as her control was better.  There were lots of chocolate buttons to keep things going but they had now turned into a reward rather than a bribe. I was better placed to know the signs of when she needed to go to help her as well.

I put her in a pull-up for bedtime but was astonished when she woke up the next morning completely dry and she did a big wee on the toilet (more chocolate buttons and a few happy tears from me).  We went to her cooking class the next morning (none of this staying in the house for a week malarkey!) and I did put her in a ‘dry like me’ pad just in case.  She was fine for the whole class but then had an accident at the end.  I subsequently found if she was wearing the absorbent pads she would wee instead of using the toilet so I ended up not using them again, although they were great during Lucy’s early post potty training days.  I just took plenty of spare clothes everywhere with us along with the potty and had plenty of toilet trips when out and about.  There were, of course plenty of days where she wasn’t as good and we had lots of accidents but on the whole she’s got the hang of it all very well this time. 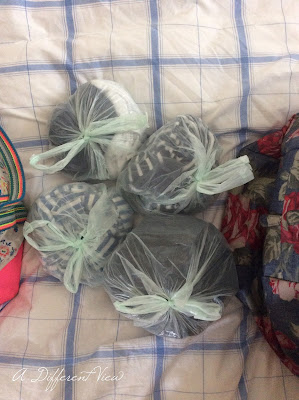 She has now been dry day and night for 3 weeks.  So super proud of her and I am excited that she can go into Year 1 wearing knickers.

I’m pleased we didn’t rush things and although its taken 2.5 years from starting our potty training journey, she has got there in the end. As she always does.

I’ll hopefully get around to writing some hints and tips for potty training that have helped us along the way soon. For now, I’m off to iron and label next weeks school uniforms!

Have you had general surgery? We need you!