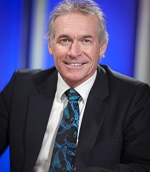 Dr Hilary Jones is the Medical Advisor at HealthExpress.co.uk, which was the first legal online clinic of its kind in the UK. In this capacity, Dr Hilary has offered health advice during monthly Twitter chats and contributed to the site health blog. HealthExpress offers a secure and efficient service to allow patients to order prescription medication online safely, with the aid of a free online consultation.

Dr Hilary became a Principal in General practice and a GP Trainer in the early 1980's. He also worked as a Senior House Officer in Ophthalmology before entering general practice, assisting in Glaucoma and Cataract extraction procedures and learning the science of refraction.

He then began presenting educational medical TV programmes for British Medical TV in 1986. Sky TV then adopted these programmes for their news bulletins soon after. In 1989 Dr Hilary joined the most successful TV breakfast station ever, TVAM. He and Lorraine Kelly were the first presenters to be signed up by GMTV when it won the breakfast franchise in 1993. He is now the Health Editor for breakfast television.

He has written several books including ‘Before You Call The Doctor, ‘What’s The Alternative?’, ‘Your Child’s Health’, ‘I’m Too Busy To Be Stressed’, ‘Total Well Being’ and ‘Natures Remedies’. His first novel, ‘What’s Up Doc?’ was published in August 2009. Recently Dr Hilary has just launched his first app for iPhone and iPad on pregnancy.

Dr Hilary is still a practicing GP and is a great believer in the health benefits of physical fitness.

He is a proud Patron of The Meningitis Research Foundation and The Lauren Currie Twilight Foundation, and is also associated with many other charities including: Alzheimer’s Society, The Stroke Association, Northern Lights Children’s Charity, National Rheumatoid Arthritis Society, British Heart Foundation and Lucy Air Ambulance.