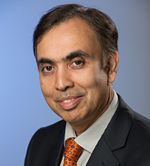 Mr Razvi has been a qualified gynaecologist since 1995 and has additional qualifications in the treatment of gynaecological cancer and colposcopy (cervical smear abnormalities). He was appointed a consultant initially in Singapore in 2001 and has been a consultant at Southend University Hospital NHS Foundation Trust since 2005. He has held academic appointments in the National University of Singapore as an Assistant Professor from 1998 till 2005.

He was the Chair for the Gynaecological Oncology service in Essex till 2014 and the Director for Women’s & Children at Southend University Hospital in Essex. He also leads the Colposcopy service. Mr Razvi was originally trained in Singapore at the National University of Singapore and had gynaecological oncology training in St Bartholomew’s Hospital and the Royal Marsden Hospital in London, UK.

He has over 30 publications and 50 conference papers as well as chapters in books. Mr Razvi has delivered lectures in many international meetings. His current research interest is in the field of ovarian cancer diagnostics and cervical cancer screening and presently has two patents from research conducted in Singapore including one in ovarian cancer diagnostics and one in fetal medicine in the rapid diagnosis of Down’s syndrome and other anomalies.

He has founded a cancer charity in Essex called COPES to support women and their families afflicted with gynaecological cancers.