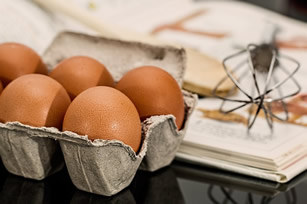 A major new study into the effect of introducing allergenic foods into infants’ diets has found that giving babies small amounts of allergens such as peanut and eggs from the age of 3 months may help to prevent the development of allergies.

The Eat (Enquiring About Tolerance) study involved 1303 families with infant children and was conducted for the Food Standards Agency (FSA). The study split the families into two experimental groups. The first group followed standard advice – their babies were kept exclusively breastfeed until 6 months. The second group were asked to introduce six allergenic foods (alongside breastfeeding) – fish, cooked egg, milk, wheat, sesame, and nuts – at 3 months.

Chief Scientific Adviser to the FSA Guy Poppy made clear, though, that the experiment was done under the close monitoring of experts and that the findings should not supplant existing guidance: 'while this study will be of interest to parents, we would advise them to continue to follow existing Government infant feeding advice. It should also be emphasised that this research was carried out under guidance of allergy professionals.' It should also be made clear that whole peanuts should never be given to children under the age of 5, because they are a choking hazard.