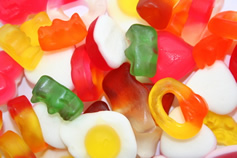 Today, in our fast paced modern lives, the vast majority of processed foods we consume contain additives. These additives can be natural or synthetically made and each is used for a specific purpose.

It is worth noting that many additives could be eliminated if we were prepared to grow and make our own foods.

There are many different groups of additives and below we explore the 6 most common:

There has been a great deal of interest in the safety of food additives over the past decade, mainly due to the changes in food labelling in the 1980's and increased awareness of ingredients contained within food. Approved food additives have been through rigorous European Union (EU) safety assessments before being certified with an E followed by a number. This procedure checks that the additive is both safe for consumption and that it is necessary in the product. Some food additives have been linked to health issues; for example it is widely regarded that several food colourings, approved for use by the EU, are associated with, and may potentially cause, hyperactivity in children. The Food Standards Agency (FSA) has worked hard with manufacturers to remove these colours from general use, however only checking the ingredients of products can ensure they are free from the affected colours. The colours listed by the FSA are:

It is extremely difficult to pinpoint the foods that may be affecting an individual's allergy. But, the general rule of thumb is to eat a diet based on fresh, home cooked food. When using processed or pre-prepared foods, check the labels for any particular additives you wish to avoid.

Information contained in this Articles page has been written by talkhealth based on available medical evidence. Our evidence-based articles are certified by the Information Standard and our sources are available on request. The content is not, though, written by medical professionals and should never be considered a substitute for medical advice. You should always seek medical advice before changing your treatment routine. talkhealth does not endorse any specific products, brands, or treatments.