Increase in hair dye and fragrance allergies in children 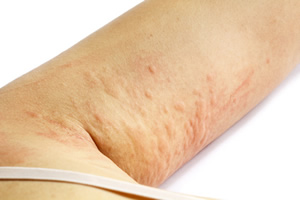 A study due to be presented at the British Association of Dermatologists annual meeting in Manchester today has found  a substantial shift in the allergens causing skin reactions in children over the last decade, with some allergies becoming less common and with others, including to hair dye ingredients, on the rise.

The study involved 500 UK children tested for potential contact allergies (skin reactions following contact with a substance*) between 2005 and 2014, and replicated a previous study, also of 500 children, between 1995 and 2004, to see the changes that have occurred in the frequency of contact allergy and the allergens responsible over the past ten years. The study was conducted by dermatologists from Leeds Teaching Hospitals NHS Trust.

In both studies 27 per cent of the children (133 in 1995 to 2004 and 134 in 2005 to 2014) tested positive to one or more contact allergy. However, where they differed in their results most significantly was in regards to the causes of these allergies. In the 1995 to 2004 study 33 per cent of these children had a nickel allergy and 18 per cent presented with an allergy to a fragrance. Between 2005 and 2014 these two allergens remain the most common, however, there was a sharp fall in the number of nickel allergies, down to 18 per cent.

Despite the fall in nickel allergies the total percentage of children with allergies remains static because more children are becoming sensitised to other substances, some of which did not even feature in the original study, including various hair dye ingredients. It is thought this might suggest increasing use of hair dyes in children, and may also be due to black henna tattoos which contain a high concentration of para-phenylenediamine (PPD). Use of these tattoos just once can make people react to PPD in other products at a later date*.

?After metal and fragrances, the next most common allergens were:

The authors of the study hypothesised that the reason for the fall in nickel allergies may be down to the European Union Nickel Directive, implemented in December 1994. The Nickel Directive limits the amount of nickel that can be used in products that come into prolonged contact with the skin. This impact of this would not be instantaneous but rather would likely show over time as new generations are less exposed to the metal, as although some people are predisposed to certain allergies others become sensitive to new substances through exposure over time.

In fact, in 2013 dermatologists raised concerns about the UK’s new five pence and ten pence coins which are nickel-plated, rather than being made of a nickel alloy, worried that people would be unnecessarily sensitised to nickel by long-term exposure through these coins.

Dr Vanessa Smith of Leeds Teaching Hospitals NHS Trust and one of the authors of the study, said: “It’s important to track the rates of allergy in children in the UK, and to recognise the underlying allergens, this can help guide policy makers and manufacturers as to potential public health risks.

“Our results suggest that efforts to curb the rates of nickel allergies have been a success and that these policies should continue. However, it’s clear that some of the highest rates of allergy amongst children are due to hair dye ingredients such as PPD. This is perhaps a sign of children using hair dyes and getting black ‘henna’ tattoos at younger ages, both of which can cause sensitivity to PPD.”

Matthew Gass of the British Association of Dermatologists, said: “Contact allergies can be very severe and can have a devastating effect on people’s lives. Nickel has been a common allergy for a long time and so it’s good to see that this study has shown that rates are falling. However, more efforts need to be made to make people aware of the sensitising properties of other common substances.”

Information contained in this Articles page which doesn’t state it has been written by talkhealth, has been written by a third party, who has not paid to be on the talkhealth platform, and has been republished with their permission. talkhealth cannot vouch for or verify any claims made by the author, and we do not endorse any specific products, brands, or treatments mentioned. The content in our Articles pages should not be considered a substitute for medical advice. You should always seek medical advice before changing your treatment routine.