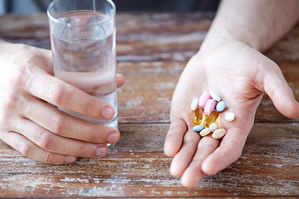 A study conducted by Cambridge University has found that a new type of drug that has been given to patients with inflammatory diseases, such as rheumatoid arthritis and psoriasis, could also be used as a treatment for those with depression.

The article which was published by Cambridge University described how their researchers from the Department of Psychiatry led a team that analysed data from 20 trials involving the use of anti-cytokine drugs to treat a range of autoimmune inflammatory diseases.1 It was found that the drugs did lead to an improvement in the overall mood of the patient - regardless of whether they helped treat the physical illness they were intended for.

The journal article went on to describe the link between inflammation and depressive symptoms, “When we are exposed to an infection, for example influenza or a stomach bug, our immune system fights back to control and remove the infection. During this process, immune cells flood the blood stream with proteins known as cytokines. This process is known as systemic inflammation.

Even when we are healthy, our bodies carry trace levels of these proteins – known as ‘inflammatory markers’ – which rise exponentially in response to infection…children with high everyday levels of one of these markers are at greater risk of developing depression and psychosis in adulthood.”

Cytokine inhibitors, which are present in the new drug, prevent the protein from flooding the blood stream and help to minimise joint pain - which has been linked as a cause of depression. Dr Golam Khandaker, one of the lead researchers in this study stated, “It’s becoming increasingly clear to us that inflammation plays a role in depression, at least for some individuals, and now our review suggests that it may be possible to treat these individuals using some anti-inflammatory drugs.”

It is common for those with chronic conditions such as rheumatoid arthritis to experience feelings of depression2, so the prospect that one medication could serve as a treatment for a variety of issues is very promising indeed. Professor Peter Jones, who worked with Khandaker on the study, has stated that evidence is not conclusive enough as of yet, “It’s too early to say whether these anti-cytokine drugs can be used in clinical practice for depression, however.

"We will need clinical trials to test how effective they are in patients who do not have the chronic conditions for which the drugs have been developed, such as rheumatoid arthritis or Crohn's disease. On top of this, some existing drugs can have potentially serious side effects, which would need to be addressed."

If you are living with arthritis and/or pain and you have any questions, you can speak to our panel of experts in our October Online Clinic on Arthritis and Pain Management. Clinical experts are now available to answer questions on issues surrounding arthritis and pain management, including osteoarthritis, rheumatoid arthritis, gout, pseudogout, psoriatic arthritis, spondylitis and systemic lupus erythematosus (Lupus or ‘SLE’).

The findings were published in the Journal of Molecular Psychiatry, which you can access here if you would like to read more.