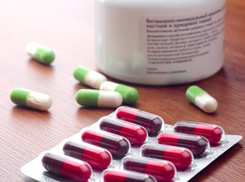 Non-Steroidal Anti-Inflammatory Drugs (NSAIDs) are medications used for a number of purposes, including pain killing, fever reduction, and for anti-inflammatory effects. As the name suggests, they are to be distinguished from steroids. Common NSAIDs include aspirin and ibuprofen, which can be used on complaints such as headaches and infections such as the common cold .

NSAIDs are also commonly used in the treatment of most arthritic conditions, including rheumatoid arthritis, osteoarthritis, gout, and neck and back pain - they can serve to reduce pain and inflammation of the infected joint.

NSAID use is associated with small increases in the risk of heart attacks, strokes, and heart failure. As a result, individuals who are at increased risk of such complications (individuals with a history of such conditions, with diabetes or high blood pressure, or individuals aged over 75, for example ) will only be prescribed NSAIDs if there is no alternative. Other individuals who should avoid NSAID use include those with a history of liver failure or other liver problems; individuals who should take particular caution when using NSAIDs include individuals with inflammatory bowel disease or kidney problems, and women who are pregnant or breastfeeding. A patient’s doctor or specialist should be able to advise them on such precautions, as well as potential side effects of NSAIDs – which vary among different NSAIDs, but can include indigestion and other gastrointestinal complications such as ulcers and bleeding, asthma, and skin reaction – as well as the heart-related complications outlined above .

Where NSAIDs prove ineffective in the treatment of arthritic conditions, doctors may often go on to prescribe steroids.