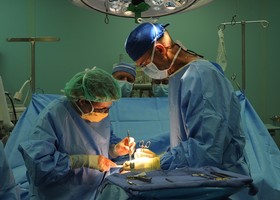 When we talk about ‘bowel cancer’ we normally mean cancer affecting the large intestine – the colon and the rectum. Unfortunately bowel cancer is one of the more common cancers and many of us know 1 or more family members or friends who have been affected by bowel cancer.

Whenever people come to see me with their tummy symptoms, many of them worry about the possibility that they could be due to bowel cancer. Of course, tummy symptoms are common – we have all experienced them from time to time. The vast majority of tummy symptoms do not have a sinister cause – but that knowledge doesn’t stop people worrying about what might be going on inside their tummy. Yet we often just put up with our symptoms. We may not want to make a fuss or we might be afraid of seeking medical help. Hospitals and clinics can feel like scary places. We may be frightened of the thought of what sort of tests the doctor may recommend or even what the tests might show.

I am going to give you all the information you need about bowel cancer (colon cancer and rectal cancer) and explain how specialists diagnose and investigate it.

How common is bowel cancer?

Unfortunately bowel cancer is one of the more common types of cancer – it is the 3rd most common type of cancer in both men and women. The rates of bowel cancer have been slowly rising over the last 10 years. Approximately 1 in 14 men and 1 in 19 women will develop bowel cancer during their life. On average, around 110 new cases are diagnosed each day in the UK.

Bowel cancer is also the 2nd commonest cancer that people in the UK will die from. The good news is that death rates from bowel cancer are falling – due to better detection and better treatments.

It is really important that bowel cancer is diagnosed as early as possible – the earlier it is found, the more curable the cancer is. Once the cancer has grown and started to spread outside of the bowel, it is much more difficult to cure. Because of this, if you are worried that your tummy symptoms might be due to bowel cancer, it is important to see your GP or a specialist as soon as possible

What is the large intestine?

How does bowel cancer develop?

Most bowel cancers start off as a tiny polyp (adenoma) in the wall of the colon or rectum. A polyp is caused when a cell in the inside lining of the bowel undergoes a mutation and starts to grow and divide faster than the surrounding cells. In time the group of more rapidly growing cells starts to become heaped up causing a small ‘lump’ to form on the inside surface of the bowel. Over time polyps can continue to grow and may develop a stalk and a head which looks like a small mushroom growing from the lining of the bowel.

Most polyps do not cause any symptoms. Most polyps are completely benign and will never develop further. However if more mutations occur to one of these rapidly growing cells, there is a small chance that over time the polyp can become cancerous.

Cancerous cells grow and divide much more rapidly than the surrounding cells. In the colon this can eventually cause a narrowing or in advanced cancer a complete blockage to the bowel. Cancerous cells can also invade through the wall of the colon to the outer surface of the bowel wall. Once this occurs, they can be carried in the blood stream or via lymph nodes to the liver.

I talk more about lifestyle changes that can reduce your risk of developing bowel cancers later on in this article.

What are the symptoms of bowel cancer?

Early bowel cancer can often cause only subtle or minor symptoms and so it is important to be alert for changes. As the cancer grows symptoms can be become more marked and obvious. Important symptoms to look out for include:

How is bowel cancer investigated?

How is bowel cancer treated?

Bowel cancer is curable – especially if caught early. The treatment of bowel cancer is coordinated between specialist surgeons (Lower GI or Colorectal surgeons) and cancer specialists (oncologists). Bowel cancer will almost always mean an operation to remove the diseased part of the colon or rectum. People are often worried that they will need a stoma or bag after the operation but this is usually not necessary except for advanced disease or cancer very low in the rectum. Chemotherapy may also be necessary either before or after the operation and an oncologist will be able to talk more about this with you.

What should I do if I have polyps?

As I discussed earlier, certain bowel polyps (adenomas) have a small risk of eventually growing and turning into bowel cancer. Polyps can usually be removed when you have a colonoscopy – and this removes the risk. However if you have had adenoma polyps in your bowel, there is an increased chance that you will grow more in the future. If you have had an adenoma in the bowel it is important that you have a follow-up colonoscopy to make sure that you are not growing more. Depending on how many and how large your polyps were, the repeat colonoscopy should be in either 1, 3 or 5 years after the polyps were found. Your GP or a specialist will be able to advise you further.

What should I do if I have a family history of bowel cancer?

Bowel cancer is unfortunately a common cancer and many families have at least 1 family member who has been affected. Most bowel cancer is due to ‘bad luck’ rather than ‘bad genes’, but there is a small familial risk. Having a single relative who has had bowel cancer probably does not significantly increase your own risk of developing the disease (unless your relative was diagnosed at a young age). However, if you have more than 1 family member who has had bowel cancer (particularly if at least one of these was a mother, father, brother or sister) you should speak to your GP or specialist about whether you should have regular checks to make sure you are not growing polyps or an early bowel cancer.

What is bowel cancer screening?

As I discussed earlier, it is much easier to cure cancer if it is caught early. At present the NHS offers 2 screening programmes for bowel cancer to help detect it at an early stage before it is causing any symptoms. The programmes also help detect and remove large polyps.

In the National Bowel Cancer Screening Programme, everyone between the age of 60-74y of age (50-74y in Scotland) is invited every 2 years to send in stool samples to check for microscopic traces of blood in the poo (faecal occult blood test or FOBt). Those people where the test detects microscopic traces of blood in the poo are invited for a colonoscopy. Although the test can be rather messy and fiddly as 2 samples are needed from each of 3 consecutive poos, the National Bowel Cancer Screening Programme has been shown to improve the detection of early cancers (or large precancerous polyps) and save lives. However, more than two in five people never return their screening test, putting themselves at risk of late diagnosis. Over the course of the next few years a more accurate and less fiddly stool testing method requiring only 1 sample from 1 poo will be introduced across the UK (the ‘faecal immunochemical test’ or FIT test).

How can I look after my colon and reduce my risk of bowel cancer?

Prevention is always better than cure. The following tips can lower your risk of developing bowel cancer and – hopefully – help you live a long and healthy life: