Eating disorders affect more people than you think, including men… 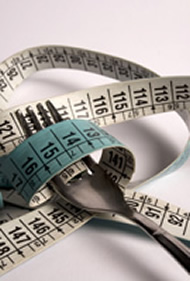 An eating disorder is when a person has an unhealthy attitude towards food that can take over your life, to the point where it makes you ill. It can include eating too much or too little or being obsessed with weight and body shape.

Statistics published by the National Institute of Health and Clinical Excellence (NICE) indicate that as many as 1.6 million people living in the UK are affected by an eating disorder, around 10% of them are men.

Some of the warning signs that suggest someone has an eating disorder are:

The NHS recognises the four most common forms of eating disorder as:

Anorexia nervosa - losing weight by not eating enough and/or exercising too much.

Bulimia - binge eating followed by deliberately being sick, using laxatives, restricting what you eat or over-exercising.

Binge eating disorder (BED) - losing control of your diet and eating generous portions all at once until uncomfortably full, resulting in feeling upset or guilty.

The fourth and most common category is Other Specified Feeding or Eating Disorders (OSFED) – where symptoms don’t exactly match those of the three main categories.

Eating disorders for men can come about from a number of reasons:

The Adonis Complex is one such condition, where men feel their body shape is too puny and begin exercising addictively, often taking supplements and steroids to tone their physique (Home Office figures show that the use of steroids by 16 to 24-year olds alone has quadrupled in a single year).

However, eating disorders are not limited to younger men. Data from NHS Digital indicate that the number of men aged between 41 and 60 being admitted to hospital with an eating disorder rose by 70% between 2010 and 2016.

Getting help for an eating disorder

If you are concerned that you (or someone you know) may have an eating disorder, you can discuss it with your GP, who will ask about your eating habits, how you’re feeling, your general health and weight. They may then refer you to an eating disorder specialist, who can provide details of any other support that may be relevant.

Treatment can be individual or group therapy, depending on the type of disorder.

If it is affecting your physical health, regular health checks may be needed.

Other information that may be useful includes:

Links to charities and support groups