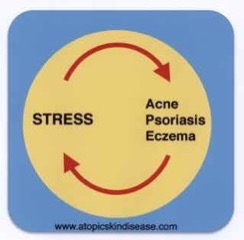 Psychodermatology is a health speciality where psychology, psychiatry and dermatology overlap. The link between the skin and the mind is clear in an everyday sense. We say someone who is oversensitive is “thin-skinned”, while someone who is unfazed by the opinion of others is “thick-skinned”. If someone is “needling” us, we might say “he really gets under my skin”. If someone seems hostile, he may be said to be “itching for a fight”. And so on.

In medicine the evidence that skin and mind affect each other goes back a long way, but, as we will see below, it is especially interesting to note that in 1891 the French dermatologists Brocq and Jacquet coined the term “neurodermite” for a skin condition we now recognise as chronic atopic eczema. They emphasised the psychosomatic, or mind-body, nature of the condition, just as we do today.

In the twentieth century the field of psychodermatology was developed especially by interested dermatologists, both in the USA, and in Europe, but it is only recently that it has become part of the curriculum of the training of British dermatologists.

This summer the annual meeting of the British Association of Dermatologists has had for the first time a session devoted to psychodermatology, as reported now in the British Journal of Dermatology. Psychologists and psychiatrists from all over the United Kingdom - and Spain and New Zealand - presented work done with their colleagues in dermatology. There was a wide range of topics, from the evidence of need for people with skin diseases for appropriate assessment and treatment of psychological difficulties, to the organisation of the necessary multidisciplinary services to achieve this, and the evidence that it is cost-effectiveness to do this.

Common primary skin conditions like acne, psoriasis and eczema often have important psychological complications, and the importance of understanding this and providing appropriate help is emphasised in several reports. Not only is it important to account for the stress caused by skin disease, but stress itself affects the skin and can make matters worse.

In the case of atopic eczema, my dermatology colleagues and I gave a paper recommending that guidelines for the treatment of atopic eczema should now include a psychological intervention called “habit reversal” when atopic eczema is unresponsive to first-line topical treatment, and before treatments with ultraviolet light, or systemic immunosuppressant drugs, are considered. We have reviewed the published literature on this topic, and point out that it is very easy to teach habit reversal to curtail habitual scratching. Such nervous behaviour leads to mechanical damage and thickening of the skin, sometimes called “lichenification”, that is seen in chronic eczema. Once habit reversal is in place, topical treatment can become effective and satisfactory, and more expensive and perhaps dangerous treatments need no longer be considered. Seems sensible, we think!

If you would like to find out more about habit reversal and chronic atopic eczema, go to www.atopicskindisease.com