Nutritional deficiences in either under or overweight people 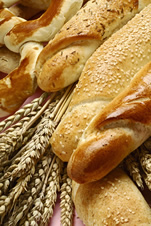 Severe avoidance of fats is often a characteristic of extreme dieting or an eating disorder. This can lead to lipid depletion, affecting how effectively the brain can work. Certain essential fatty acids are important for building cells and regulating gene development. It has been found that with non-meat eaters there are often less fatty acids ingested and also the same with those who restrict their food intake generally. A recommendation given if this is the case, is to increase the amount and variety of foods eaten and also to use supplementation to add vitamins and minerals to replenish what may have been lost.

Being very underweight can result in a weakened immune system, fatigue, anaemia, weakening of the bones, for women-periods stopping, fertility problems and other health problems as your body has to work harder to function.

Underweight people may be advised to gain weight by increasing their calorie intake by eating three balanced meals and day and three healthy snacks.

In addition having malnutrition as a result of being underweight, there are other factors that can cause deficiencies within the general population. A nationwide survey undertaken in 2010 in the United Kingdom showed that more than 50% of the adult population have insufficient levels of vitamin D and 16% have severe deficiency during winter and spring. The survey also demonstrated a gradient of prevalence across the UK, with highest rates in Scotland, northern England, and Northern Ireland. People with pigmented skin are at high risk, as are the elderly, obese individuals, those with malabsorption, short bowel, or renal or liver disease.

Vitamin D deficiency typically presents with bony deformity (rickets) or hypocalcaemia in infancy and childhood, and with musculoskeletal pain and weakness in adults.

Sources of Vitamin D include:

If you are unsure whether you are eating the right foods containing the right levels of vitamins and minerals, it is advisable to talk to your doctor.