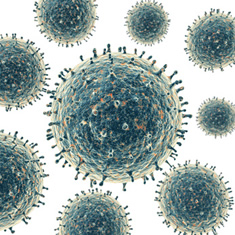 Chlamydia is one of the most common sexually transmitted infections now in the UK.

Symptoms of chlamydia include pain on urination, unusual discharge from the penis, vagina or rectum or, in women, bleeding between periods or after sex.

However, most people have no symptoms so do not know they are infected – some data suggest that 50% of men and 70–80% of women who are infected will not get symptoms.

Testing for chlamydia is done with a urine or swab sample. The infection can be treated with antibiotics, but if left untreated can cause pelvic inflammatory disease and reproductive tract complications including ectopic pregnancy and infertility.

The goals of chlamydia screening are to detect and treat asymptomatic infections, to limit ongoing transmission in the community, and to reduce the incidence of complications.

The National Chlamydia Screening Programme recommends that sexually active people under the age of 25 are screened for chlamydia annually or after a change of sexual partner. Tests under this programme are available at sexual and reproductive health clinics, GP surgeries, pharmacies, contraception clinics and colleges, as well as online and via post.

Those not eligible for the programme can still request a free chlamydia test at a sexual health clinic or a GP surgery. The National Institute for Clinical Evidence (NICE) guidance on antenatal care advises that chlamydia screening should not be offered as part of routine antenatal care. This is until further research is undertaken to assess the effectiveness, practicality and acceptability of chlamydia screening in an antenatal setting.

All men and women aged 16-29 years old, who were listed on the municipal population from March 2008 to February 2011 were eligible to participate. Personal written invitations to take part in a chlamydia screening programme were sent to 269,273 people. Participants were asked to log onto an internet site to request a specimen kit (urine for men; vaginal swab or urine for women), to be returned in a prepaid envelope. Test results, with a referral letter for those with positive results, were provided online. Treatment and partner notification were done by the participant's GP or at a sexual health clinic.

The percentage of those testing positive for chlamydia in the screening group after the first invitation was the same as in the control block (4.3%) and 0.2% lower at the third invitation. This decrease in positive testing after 3 screening rounds was not statistically significant.

Rates of positive results were higher in young people under 20 years old than among older invitees in all 3 rounds – at the first invitation, 7.1% in those under 20, 4.9% in those aged 20–24 years, and 2.7%  in 25–29 year olds. The proportion of participants testing positive for chlamydia according to age did not change markedly after 2 or 3 invitations.

The researchers concluded that although individual invitations and internet home sampling was feasible, the register-based screening programme did not increase testing enough to significantly reduce chlamydia prevalence, and there was not sufficient evidence to support rolling out the programme on a national scale.

For more information about all aspects of women’s health including information relating sexually transmitted diseases, the following might be of interest: