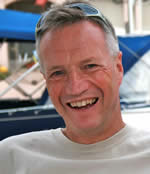 Alastair Miller has been a Consultant Physician in the Tropical & Infectious Disease Unit at the Royal Liverpool University Hospital and an Honorary Fellow at the Liverpool School of Tropical Medicine since 2005. He is also an Honorary Senior Lecturer at The Institute of Infection and Global Health at Liverpool University. Prior to that he was a Consultant in the West Midlands and Honorary Senior Lecturer in Infectious Disease at Birmingham University. His main clinical interests are blood borne viruses, bone and joint infection and chronic fatigue syndrome/ME. He chairs the Specialist Advisory Committee on Infectious Disease and Tropical Medicine.

Alastair trained in medicine at Cambridge and Westminster and in infectious disease in the Royal Navy, Birmingham and London. He worked with the Royal Marines in Kurdistan after the first Gulf War and was a consultant and Professor of Medicine in the Royal Navy.

He has been involved clinically with ME/CFS since his time as a registrar in the mid 1980s. In the Navy he was the lead clinician and in Worcestershire he established a multidisciplinary team for CFS management. Since arriving in Merseyside he has become the clinical lead for CFS and runs a diagnostic clinic and a therapy service in collaboration with therapy and psychology colleagues. He is deputy chair of the British Association for Chronic Fatigue Syndrome and ME (BACME) and Principal Medical Advisor for Action for ME (AfME).

He is Deputy Medical Director of the Physicians Training Board at the Royal Colleges of Physicians and an examiner for MRCP(UK). His outside interests are sailing and mountaineering.