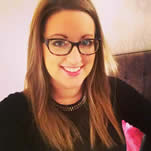 Sarah graduated from Robert Gordon University School of Pharmacy and Life Sciences in 2009 and completed her pre-registration training year with Rowlands Pharmacy in Dalgety Bay where she focussed her time on health promotion in the community, providing a variety of healthy living and support services for diabetic and coeliac patients. For her successful year, she was awarded Pre-Registration Pharmacist of the Year at the Scottish Pharmacy Awards. Sarah’s first post as a qualified pharmacist was as a Pharmacy Manager with Rowlands Pharmacy in Aberdeen, where she worked closely with her patients and the local community delivering a variety of services including blood pressure measurements, weight management support and flu vaccinations. In January 2013, Sarah returned to RGU School of Pharmacy and Life Sciences part time as a lecturer in Pharmacy Practice, integrating the new chronic medication service into the curriculum. She remained working as a Pharmacy Manager where her focus was supporting a large number of substance misuse patients and represented NHS Grampian as a Pharmacy Champion for the area as well as representing Rowlands Pharmacy on the Area Pharmaceutical Committee. Sarah has recently relocated to join the team at Rowlands Pharmacy head office as a Clinical Pharmacist in the Commercial Services team where she is supporting advanced services delivery across Scotland, England and Wales as well as acting as a clinical advisor across the business.