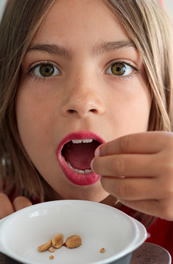 New research has found that children with a severe peanut allergy can significantly build up their resistance over time. The Peanut Allergy Oral Immunotherapy Study of AR101 for Desensitization (PALISADE) study, which involved almost 500 children aged from four to 17, was partly run by King’s College London and the Evelina Children’s Hospital in London.

Before the trial started, some of the children could not even tolerate one-tenth of a peanut. By the end of the trial, which used a peanut extract to gradually increase tolerance, two-thirds of the young people taking part improved their tolerance by an average of 100-fold – the equivalent of two whole peanuts.

The Independent published the news on Sunday, 18 November, describing the research report as marking the “largest and most comprehensive finding to date.” The newspaper focused on the story of six-year-old Emily Pratt, who’s mother, Sophie, said “The study has completely changed our lives. Before Emily took part, we were uncomfortable being more than 20 minutes away from a hospital. We can now let her socialise with friends and do all the normal things that other children do.”

Professor George du Toit, paediatric allergy consultant at Evelina London and the UK chief investigator for the study, told the Independent: “The results of this ground-breaking study are very promising and suggest that we will be able to protect children who are allergic to peanuts from having a severe reaction after accidental exposure.”

You can read the Independent article and the and the research report on the New England Journal of Medicine online.