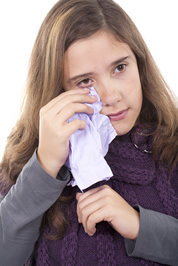 Symptoms of hay fever include:

Around 41% of us suffer with hay fever at some point or another during our life time, and 1 in 10 people claim that their hay fever stops them from going to work or school when symptoms are at their most severe. Whilst hay fever itself is not serious it is clear that it can affect a person’s quality of life.

With allergies affecting so many of us, talkhealth has conducted numerous surveys to broaden our understanding and awareness of the symptoms that hay fever sufferers live with daily. In our most recent hay fever survey we asked about the symptoms people suffered with the most. The most common symptoms were unsurprisingly sneezing (87%), a runny nose (87%) and itchy eyes (73%). These are symptoms which the vast majority of hay fever sufferers will experience at some point or another; however hay fever can lead to further complications for some. 33% of people stated that they experience shortness of breath as a result of hay fever. Asthma symptoms can begin or increase in some cases of hay fever, with sufferers experiencing shortness of breath, coughing, wheezing and a tight chest. For those who do not experience asthma at any other time other than when they have hay fever, these symptoms can be unnerving.

The Met Office study also found that levels of productivity dropped by more than 25% in those workers who were experiencing symptoms of hay fever. With pollen levels rising year on year this is a problem which is only set to increase. Dr Jean Emberlin, scientific director of Allergy UK, has stated, “Increases in pollen counts due to climate change, population, air pollution, urbanisation and stress are making people more prone to hay fever.” She also went on to describe how sufferers are worsening their symptoms, “Stress, dehydration, diet and a big life change are other factors that can worsen symptoms - as these lower the immune system.”

When hay fever sufferers were asked to name the month in which they feel their hay fever is at its most severe, 57% of people answered June.  With the pollen count being at it’s highest throughout the months of June and July, talkhealth would like to offer you some key tips to help alleviate your symptoms this summer.

If you have any top tips for living with hay fever, please do join in the conversation on our talkallergy forum.

Sources used in writing this article are available on request.