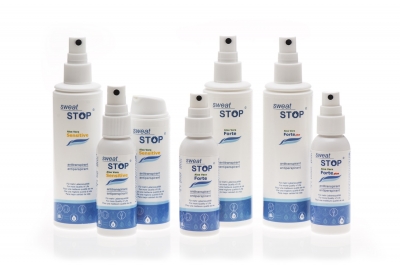 SweatStop offers a distinctive range of clinical strength antiperspirants with a product suitable for any area of the skin affected from head to toe.

Containing aluminium like most antiperspirants it also contains the soothing additives aloe vera and panthenol (provitamin B5) and the pH is optimised for skin tolerance.

SweatStop has a range of products and preparations including sprays for the body, hands, feet and underarms, roll-on for the underarms, lotion for the face and forehead, an instant lotion for the hands and powder for the feet. With four strengths from Sensitive with a high skin compatibility to Forte Max for the hands and feet. The Forte Plus strength is very strong but also more skin tolerant than comparable products.

I used the SweatStop Forte Max on my feet as per the instructions and found it to be very effective. At first, I thought that it felt a bit sticky but once it dried it was fine. I am a nurse and so spend a lot of time on my feet and underfloor heating doesn't help matters!

I was a bit dubious at first when I read the instructions which said after the first 2-3 applications it would only need to be applied every other day. However, it did what it said on the label and I was very impressed. I have studied Dermatology during my career and haven't come across anything as effective as this before for sweaty feet. I'm certain that I will buy it on a regular basis, although I will have to hide it from my son as he has the same problem with his feet.

I have always suffered from sweaty clammy hands, makes it very embarrassing when offered a hand to shake at a job interview or meeting a teacher at a parents evening, the list goes on, I find myself trying to discreetly wipe my hand on my clothing or sometimes having to find ways to avoid the embarrassing handshake without appearing rude. I also am a dog groomer and the salon gets very hot, inevitably my hands get hot and drip with sweat .. when grooming a clean dog the last thing you want is to transfer sweat onto your fresh groom. I actually keep a "sweaty hand towel" on my table to wipe my hands with.

I was sent the Forte Max antiperspirant spray to trial which is recommended for hands and feet only. I received my bottle and I have to say I have been happy with the results. The instructions were to spray the antiperspirant onto dry palms of the hands before going to bed. massage in and let dry. Repeat this every 24 hours.

Initially, my hands felt very dry and a little sensitive, this wore off after the first few days. I have continued with my treatment and now use it only every few days when I feel the need. I no longer find my hands are getting so wet and I can only contribute that to the SweatStop spray. Very happy with results and so happy to have found something that can stop this rather embarrassing and limiting problem I have/had.

I give this product 4 out of 5, the price is fairly high otherwise I would have awarded a 5 out of 5.

I have been using SweatStop antiperspirant for four weeks now. I must admit to having an initial scepticism about whether it would work. I have tried just about every antiperspirant and deodorant on the market, as well as some that have been prescribed by my G.P. I have always suffered from severe underarm perspiration problems, especially when I am stressed, which is often the case during the current pandemic. The best other products have been able to do for me is to mask the odour, rather than cure the problem. I even resorted to asking my GP if it was possible to have my underarm sweat glands removed to cure the problem. He told me that he would not recommend this, as sweating is part of the body’s natural temperature regulation system.

Anyway, I initially used SweatStop just under one armpit – the one which sweats the most – so that I could compare its performance against my regular antiperspirant which I used under my other arm. I expected SweatStop to be heavily scented, as that is what I am used to from other products. I was pleasantly surprised to find out that it wasn’t. I have now started using it under both arms and have really noticed the difference – especially the lack of sweat stains on my clothes.

I would say that the only downside to using SweatStop is having to change my morning routine. I am so used to applying my antiperspirant on a morning before I dress, and it has taken a few days to get out of this routine and start applying SweatStop last thing at night.

All in all, I would rate this product 4.99 out of 5. I have deducted 0.01 because I, instinctively, would prefer to apply it in the morning, rather than at night but, hey, I am sure I will get used to it eventually.

I was keen to try the SweatStop Antiperspirant spray as I have always suffered from excessive sweating especially my underarms, and it can be really embarrassing. I've tried a lot of different deodorants and none really make a difference until I tried this one. I applied it as directed after showering once a day, I didn't have huge hopes but it really exceeded my expectations. I resisted the urge to spray aerosol deodorant as I normally would several times a day, and was impressed to find that my underarms stayed much drier and I had no embarrassing sweat patches or odour by the end of the day. I feel much more confident now and don't avoid tight-fitting sleeves because I don't have to worry about the sweat. The only issue I have with SweatStop is that a few times it has made my underarms really itchy after use. This isn't after every use and only lasts about fifteen minutes, but it was pretty uncomfortable and I had to resist the urge to constantly scratch my skin. However overall the benefits of using the product outweigh this because I do feel so much more confident.

It was decided that the 'forte' SweatStop was the appropriate product for me.

The antiperspirant was supposed to take days to start to work but I found it pretty effective straight away. It is certainly a good product. I have no problems to report, it is just how it is with sprays that if you have any broken skin you must not spray that area. Blisters etc have been my only hold-up with this product.

I tried the SweatStop Antiperspirant as I have long suffered from excess underarm sweat to the point where it was ruining shirts on a regular basis.

I have generally used a roll-on antiperspirant in the past, and although I have found this effective in stopping sweat it does leave my skin feeling incredibly dry and can on occasion cause irritation. When using the SweatStop spray I was already used to having to apply a product at bedtime the prior day, so this was not an issue for me. I was sceptical at first however about using a spray, as I was very used to the overall physical sense of protection which a roll-on provides. I found that it did take me a few days to get confident with using the spray in a way which made me feel comfortable that my armpit was covered. I was never certain if I had the nozzle pointing quite in the right place and a single spray never felt like quite enough.

However, once I was used to this transition from roll-on to spray I found the SweatStop to be very effective in performing the result which its name suggests.

My skin felt much less dried out than with a roll-on and I have had no issues with irritation. The overall effect felt much more natural than I found with my previous product.

The only reason I have neglected to give 5 stars is that for me personally I find I receive more psychological comfort and feeling of protection from using a roll-on, but I suspect that will change with time as I gain more confidence in the clearly excellent results which the SweatStop spray provides.

For a number of years, I have suffered from excess underarm sweat especially when wearing nylon tops and have even looked into botox in my armpits but thought I'd give this product a go before going down the injectables route and after having tried lots of different products on the market I must admit this product is superb!! I got zero irritation from this product, unlike some others I've tried out in the past... I feel much more confident in tops now without the worry of getting any sweat patches especially in the summer or in the winter when I take my jumper and/or coat off... I would highly recommend.

I have suffered from sweaty hands and feet since my childhood. It is particularly embarrassing during the summer as I have difficulties walking with sweaty feet and I have to keep wiping my hands dry.

I tried SweatStop antiperspirant for sweaty hands around 3 weeks ago. I had low hopes because other strong antiperspirants I have used during the years have not been effective.

To my surprise, SweatStop worked from day one. The spray is easy to apply on your palms and dries fairly quickly. The instructions on the bottle mention you can spray your palms up to 5 times but I found the product was effective with a single spray.

I tested the efficiency of SweatStop by doing an online fitness class. I usually need to place a towel over the exercise mat to stop my hands from slipping away with sweat. With SweatStop I had no issues.

I would give this product 5 stars as no other antiperspirant has been as effective on my hands. I can't wait to buy the sweaty feet SweatStop treatment and apply it during the summer months. I hope it will work in keeping my feet from slipping away from my shoes when I walk.

I've really found this product helpful, the protection against dampness from sweating is better than any product I've tried.

It's helped me be able to wear clothes I would have previously avoided which has helped my confidence improve. I would recommend this to anyone who has trouble with sweating/dampness and thinks that no product works, this stuff does! 4/5 as I wish there was more of a scent to it, other than that, perfect.

If you're interested in helping us review health products then become a talkhealth member and let us know! If you're already a member, then just update your preferences once you're logged in.